After getting inspired by snorkeling during the Christmas trip, I was determined to go deeper into the water. I made up my mind and finished off the theory for the certification for diving in the sea through the month of January & I was ready for the Chinese New Year holidays for the four open water dives required for the certification. I had planned well in advanced this time & booked the tickets for Krabi, Thailand since the diving season on east coast of Malaysia was closed due to monsoons. And from the earlier experience from the Phuket trip, I had made myself better equipped with information since this time I was going to travel alone as the group from last time had different things on agenda.

I caught the cheapest flight around..People love Air Aisa around here because it makes travel possible for so cheap! After getting down at Krabi I directly took the ferry to Phi Phi Islands where I was planning to stay during the next 4 days. 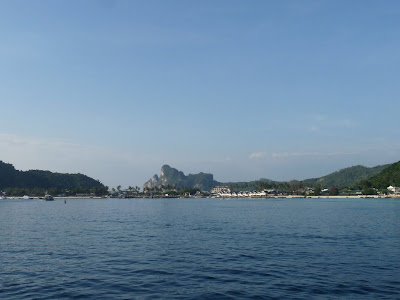 I started chatting with this Irish girl, Ciara, on the way. She was in her early twenties and traveling around the world for few months. A German guy also joined the conversation. He told us that he tried to book accommodation but everything was full and he could not find anything. Now I started feeling the excitement..though I knew I would certainly get some help from the diving school, it was high season and cost was surely a concern. So we planned to share a room to find a better deal.

After reaching we inquired for a while and finally settled for one at the Princess resort near the beach. Since we only had one key and different plans it was going to be some issue but we managed. I visited the diving school to finish the paperwork after a brief walk on the beach. Saw this interesting board in front of a dive shop...made me feel good that I am going to be REAL traveler according to them.:) 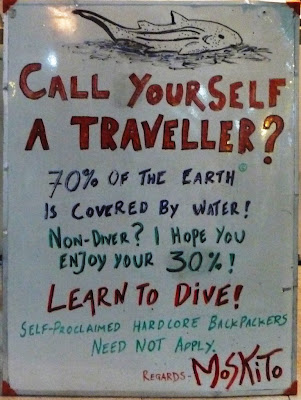 I was introduced to my instructor Joost, an elderly Dutch guy..felt a little comfortable in the safe hands of an experienced fellow on the first dive in the ocean!

Later that night I went out for dinner & some drinks with the new European friends. The German guy, Oliver was on a 5 weeks vacation and also visiting for diving and was planning to dive at different spots in Asia starting from Phi Phi. Ciara was not sure but she signed up for the diving course next day.

I had a theory exam to be finished so retired early. Also wanted to be fresh for the early morning dive. I was already feeling the excitement and don't know how many times I dived during the night..in my dreams. :)

In the next two days we made 4 dives around 45 minutes each. Sharing some of the videos from that...
All videos were shot by Marcella from Visa Diving Shop, a specialist underwater videographer. Thanks Cella for recording the memorable moments!

Well, these videos will just give a glimpse of what I saw..but does not even come close to portray what I experienced. As I feel even the videos are insufficient, I will not even try any futile attempts with words. There is no sound but mostly it would have been the videographer's breathing bubbles and the boats on the surface. :)


It is a stunning world out there...and even the best of aquariums come no where near to showing it as it is!

During some reading on what I would get to see, I found out that the main character in the film Nemo is actually called aNEMOne fish. Hat's off to Pixar for the name they came up with!

The next two videos actually are the cream of the pie..the best of the diving experience!

The camouflage, the organisms have underwater is just indescribable! You wouldn't even know that you are not looking at a rock but a fish or something else is also hidden right in front of your eyes! See this video too see a cuttlefish change not just its colour but also its texture!

And seeing a shark in its natural habitat does not compare to any other...

And as I say in most of my posts..all good experiences come to an end..and this one too was no exception...interestingly there was a quantification of it this time around..as it could be measureed in terms of the pressure gauge showing the air remaining in the cylinder!

But the fun continued for a while even on the boat..

I now have official permit to dive till 18 meters which we reached during the last two dives. Another two guys in the group had got certified as dive masters after a month of training or so..but they had another small test to pass..which we all were invited to see..drinking a bucket of beer using a snorkel! Since a snorkel closes the nasal openings it essentially meant that the bucket was to be finished in one breath!

Night life in Phi Phi was sure fun..Thai Boxing & Fire shows were interesting features in the bars there..Usually drunk tourists would get into the ring to win free bucket of booze..[yeah its 'bucket' there not a bottle :)]..but they are not as fun to watch as the local professionals.


Fire Show at the Apache Bar on the beach


Tourists having fun at the Fire Show, Apache Bar


I had another day on Phi Phi and I decided to experiment with rock climbing. It was not going to be high but high enough for an initial attempt. I signed up with CAT's climbing where Ryan, an American in his twenties, guided us pretty well knowing that we were beginners. Niv, an Israeli was another beginner along with me. Martina, George & Alexandra were a little experienced in the group. We headed towards the cliff from the beach..this was the area of Phi Phi island where we had had lunch during a one day boat trip from Phuket. 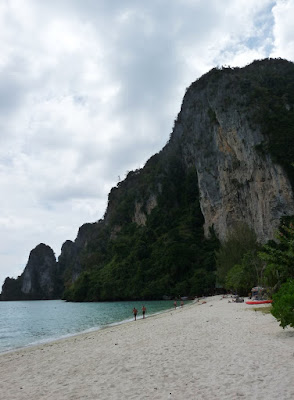 The Mountain that we climbed..

After the initial briefing I started the first attempt.. 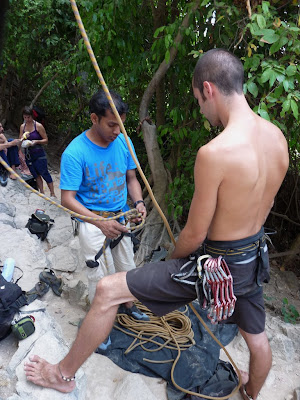 I followed Ryan's instructions, use hands just for balance and legs for all the body weight.. 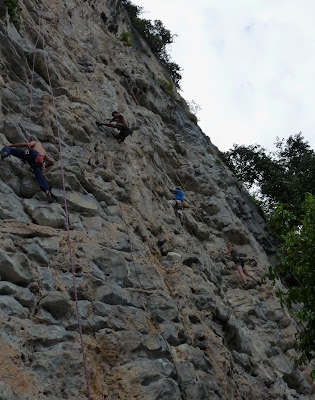 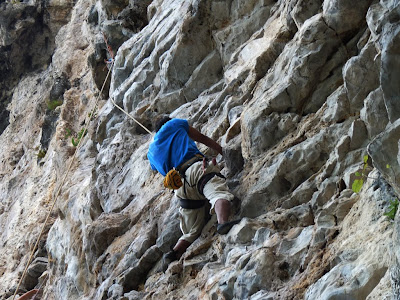 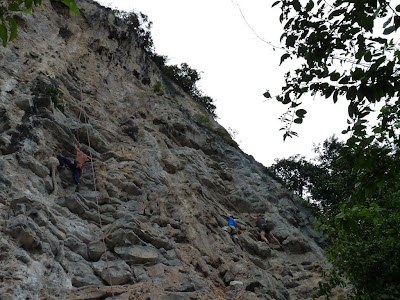 It was a very tiring...took me around 15 minutes to reach the top but I felt like I had ran a marathon. 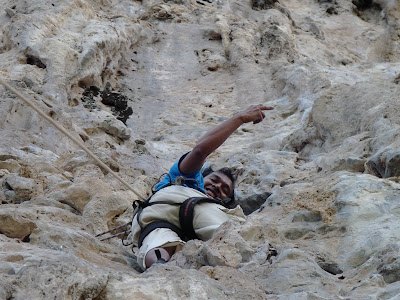 The view from the top was amazing which according to Ryan was the most fun part of the climbing anywhere in the world. 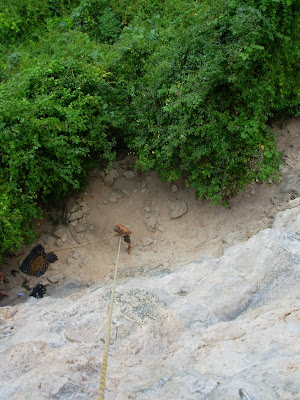 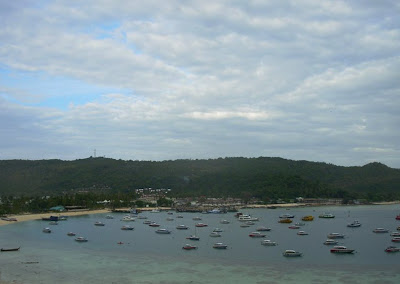 It was a new experience but frankly I had enjoyed diving more than climbing. Technically I had just climbed around 25 meters but we already started 25 m above sea level.

But I think I had been higher up the day before to the View point to see the sunset..but it was a climb over a man-made concrete path..so the height even though higher did not matter as much the 50m vertical climb. :) 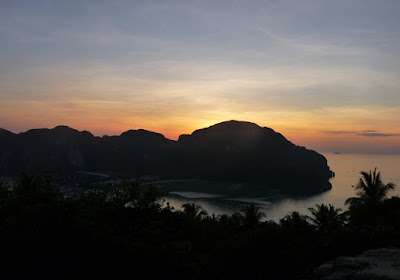 Sunset from the view point 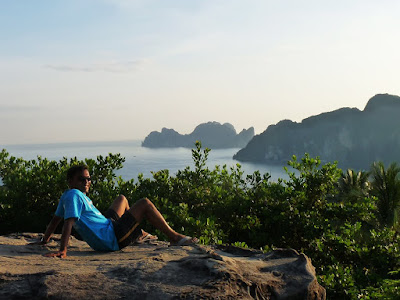 I left the next morning to catch my flight from Krabi back to Kuala Lumpur. I realised that this was first time I was flying with sun right on the top..It was a fun to watch the different layers of clouds...some resembling ultra light cotton balls floating in mid air & some resembling flat soft beds..

But what I saw next..summarized my whole trip in one go..conquering heights & depths to see the unexplored beauty of nature!!