That’s what Steve Soderberg will name his film if he makes one focusing on the life around the Bangla road area in Patong, Phuket. 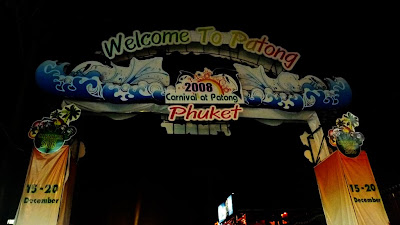 The gate was a part of temporary decorations for the New Year but for me it certainly identified as an entry to a different world. A world where ‘Sex’ had a pervasive presence and a very loose semantic..not just in coital context but also in terms of gender. Because in most places, the center-stage was occupied by trans-sexuals... 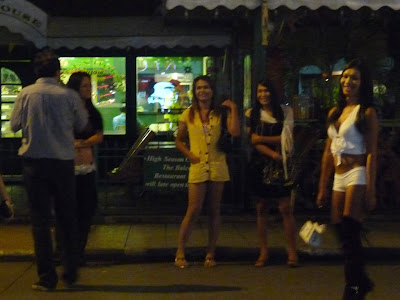 ...mostly people who thought they were women trapped in men’s bodies. I am not sure whether they really felt that or it was just because of the money that they preferred to be women in one of the hottest places for sex tourism in the world!

The names of the bars in that area also belonged to a very special category, in which, I thought ‘Seduction’ seemed like a descent name...amongst the group of ‘Blow Job’,‘69’, ‘G-spot’ or ‘Wet Dreams’! 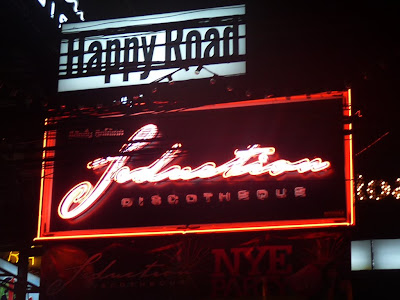 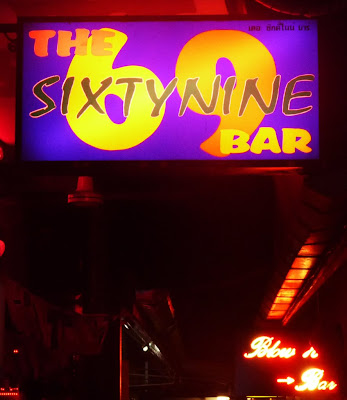 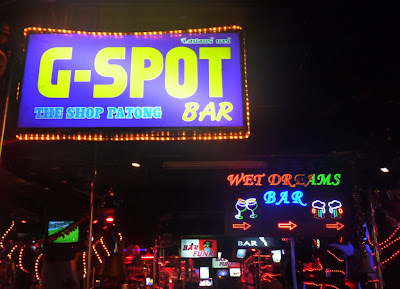 When you see men, negotiating with women...you know that there is something wrong going on there...but it was funny because most of the men would not be sure if it was really a woman they are talking to! 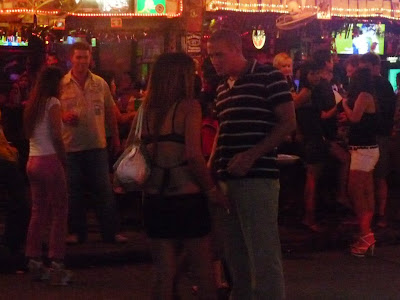 It was very amusing to watch there reactions...when they realised it! 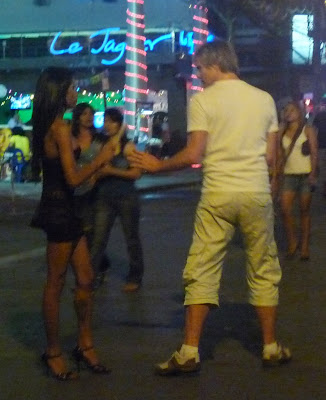 When you see pole dancing, you presume that it is an adult entertainment spot..but the most shocking experience for me was when I saw families enjoying the artifacts on display as if it was a family hangout spot!
There were people with kids in prams..and even elder. And they did not have a shock on their face..as one would expect for someone who has taken a round turn..the kind of expression when people visiting Dagdusheth Ganpati in Budhwarpeth, Pune do when they take a wrong turn!

Some one made an interesting comment on the above video.."Was your camera drunk?" I think the later half of the video is an amazing example for visualising how most of the people on Bangla Road will be seeing things around there after midnight. :) 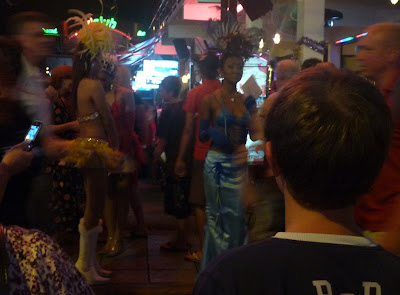 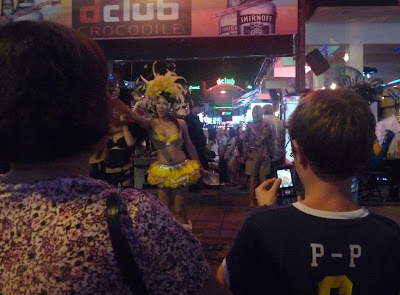 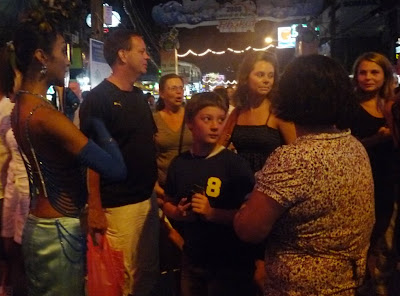 They all enjoyed the view..and even posed with the ‘Ladyboys’ to take pictures of there MEMORABLE visit to this place. 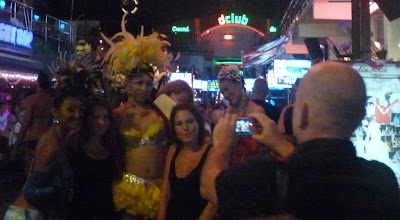 Since people used to pose for pictures..some people thought of another business idea around that. They brought these scary Iguanas and would charge 10 Bahts per picture. 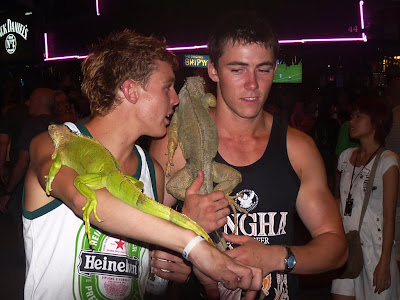 It was another metaphor, I thought, for people losing all their inhibitions!
I was appalled by whatever I was getting to see..was it real? was it REALLY real? I wondered as I made my way through all that chaos towards the end of the street. 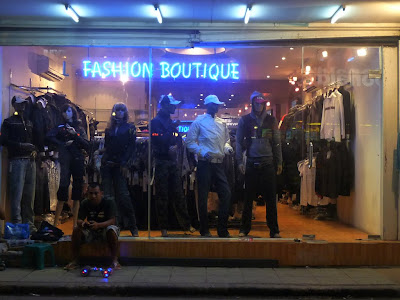 The Tatoo shop was open all night..and most people would come all drunk late at night..enthusiastic to retain the memories of an amazing trip...forever on their bodies! 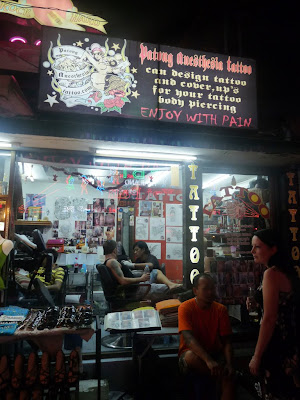 I could not stop but laugh when I saw the Police at that end...behind the barricades..as if being prohibited from the area! 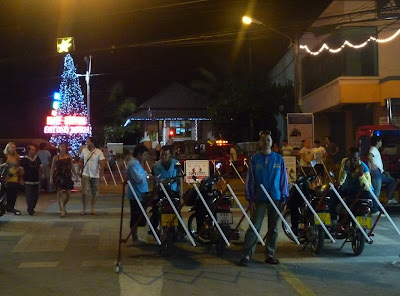 But just around the corner on the other street were many interesting shops...It did not shock me as much when I noticed that there were some amazing toys being sold there! And these were for kids, not for adults! I was amazed by the variety in both hand made and manufactured electronic toys. 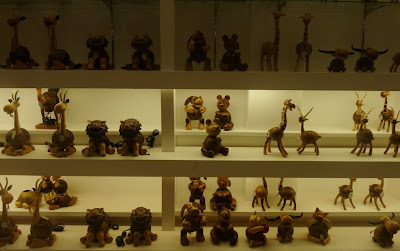 A wooden frog which made sound exactly like the real one! 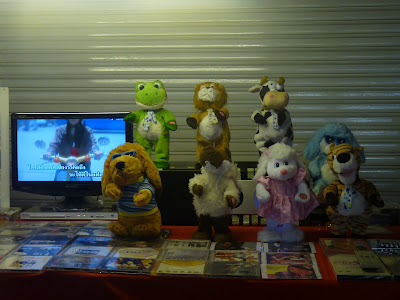 See the video to watch them dance..


Cars that flipped wheels to make a turn!


There were some interesting art works on sale too... 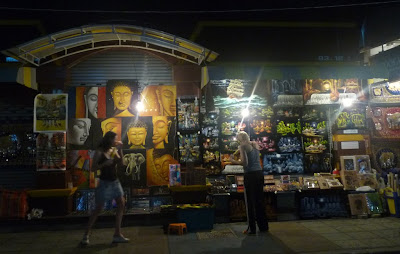 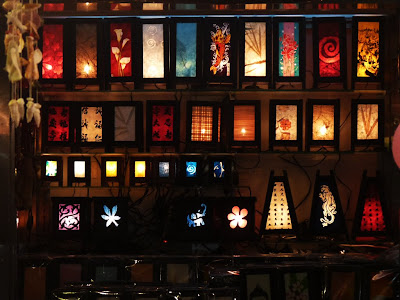 These are carvings on a bath soap! Takes around 45 minutes for each of the delicate piece.. 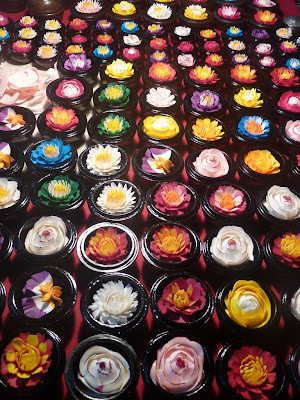 It was typical in art shops that you would see an artist working on some artwork... 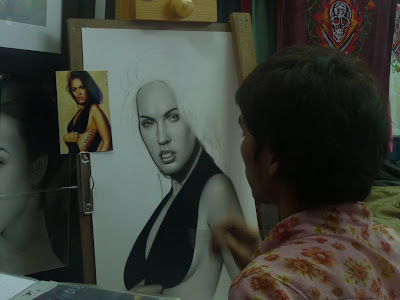 I had a small chat with one of them who worked on buffalo hides to create intricate designs..but he did not allow me to take any pictures.

We walked around the place most of the days while we stayed there...but there were not any new surprises after the first day...and I wasn’t expecting any either.
When truth lies naked in front of you I don’t think there is any scope for more revelations.
Posted by parththefirst at 10:08 PM

parth, must say u're writing like a pro now. why dont u start travel writing while u r having a ball out there? seriously, u can sell like hotcakes...

oh this is renu btw..wonder why i was called anonymous